Information Theory with Monica from Friends

I put Netflix on while I wrote this. Can’t remember what show I was watching though… 🤔

Before we jump in, let’s define **information**.

**Information** is the answer to a some question. It is the resolution of an uncertainty.

So, 1 bit of information is the answer to 1 yes-or-no question.

Imagine you and Monica are sitting in the coffee shop, and you say something like:

“Donald Trump tweeted something controversial this morning” - you.

This would be Monica:

That’s because Monica gained very little information from your statement. Certainty gives no information, and highly probable events only give a little.

Then her reaction would be a bit more like:

She just gained **a lot** of information.

This is a key insight of information theory. The information gained by an event is inversely proportional to its probability.

The information gained by an event is inversely proportional to its probability.

Entropy is a measure of uncertainty of some message source. It’s given by the following formula:

Don’t worry, Monica’s gonna break it down for you.

The log part is the information gained from the response "i" being given, and p_i is the probability of that response.

Imagine you and Monica are sending each other probabilistic messages, where each bit sent is given by a fair coin toss. For a heads, we send a 1; for tails, we send a 0.

Therefore, a 0 and a 1 each have a .5 probability. The entropy of this message source is then given by 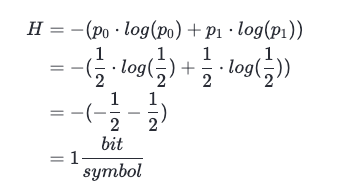 This means that, on average, it will take 1 bit to send each symbol, or, for every heads or tails response we want to send, it will take one bit.

The above table can help give us an idea of some of the values in question. Notice how log(p) is negative—this is why there's a negative in our entropy formula.

Now, recall that entropy is a measure of uncertainty. Probability matters, since probable events are less informative than improbable ones. If we considered the same scenario, but with an unfair coin, say with a probability of heads of an eighth. The entropy would be:

Entropy is a measure of uncertainty of a message source. 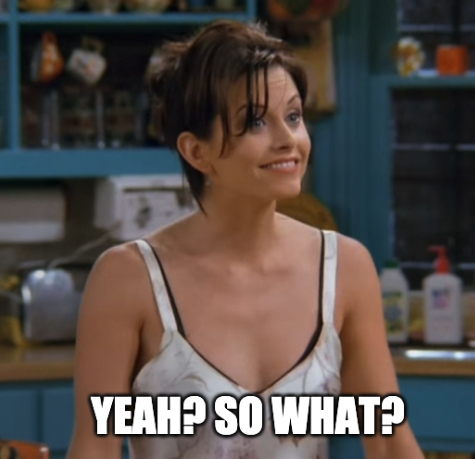 Monica wants to know why she should care.

This has repercussions on how we can encode information, to send it across a wire (which we do, all the time Monica). We want the message to get there as fast as possible, so the less electric pulses we’re sending through that wire, the better.

The main lesson of the above is the following:

This is the essence of a Huffman coding, a very efficient way to encode information.

Entropy is maximized when we have equally likely events.

That is because that’s exactly the situation with maximized uncertainty. Note that the entropy formula simplifies a bit for this case (p1 = p2 = ... = pn).

I should probably add that there entropy in information theory and entropy in physics are not exactly the same thing. There is a relationship, but it is not super straightforward. You can read more about it here (and may the force be with you).

Monica commends you for getting this far. 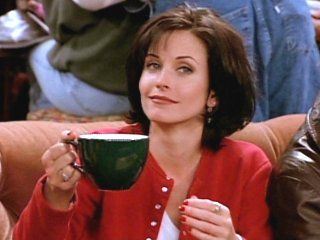 Want to know when I write a new article?

Get new posts in your inbox